You will only be stitching with one color. 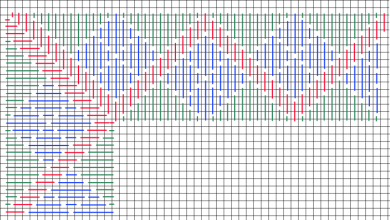 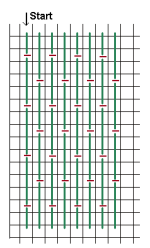 Thread 2 strands of Razzle-Dazzle in one needle.  Thread 1 strand embroidery floss in another needle.

Bring the Razzle-Dazzle thread to the underside of the canvas and back up again to start another row.  Repeat the entire process until you have reached the end of the area.

Finish the Razzle-Dazzle by sinking to the underside and whipping the tail secure.

When finished, work Double Long Arm Cross along the two sides of the couching.

Go up on the odd numbers and back down on the even numbers.

Using the graph below, work red numbers by coming up the odd and down the even.

When you are finished, start andother thread and work the black numbers.  Start and end thread with whip stitch.